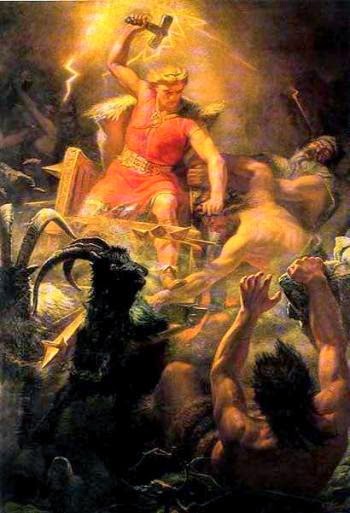 Many years ago, I went to a special place in the woods to dedicate myself to a Goddess.

But the ritual did not go as I had planned. It was not meant to be, not at that time in my life.
When it comes to true initiation, it is not the humans who decide. A person can not claim a Deity, it is the other way around. The Gods choose their humans.

So when I walked out of that forest, I had been claimed by Thor.

I was a little puzzled by what had just happened, but it felt good. It was right on many deep levels. And after all these years I'm still grateful that Thor stepped into my life at that moment.
He is the Very Best Friend a girl like me can have!


Thor is the Guardian of everything good, fertile and sacred. And He is not a bit shy to use force to protect what is important to Him. Annoy Him and he will swing his lightning hammer at you. He is in complete control of the lightning and the energy in it: electricity. And this is not His only strength, He is the Son of Earth and is in fact invincible.

Many people make the mistake to think that Thor is just a muscle man with little brains. This is because of some stories about Him that were (re)written in Christian times. The leaders of the new religion had every reason to try to put down the most popular Deity of the common folks. They could not deny his strength, so they depicted Him as just a dumb bully.

But Thor has deep rooted wisdom and knowledge. He is not cunning like Odin, but He is wise, clever and straightforward. Standing His ground and protecting the ground with all means possible if necessary.


So after He claimed me, I started to really like Him.
But only recently I've come to understand why he chose me. Actually it is quite obvious, but I couldn't see what was right under my nose.

I am His kind. Of course!

I'm a fighter and I protect what is important and sacred to me with all means at hand – in my case: words. I have strong feelings about honesty, truth, justice, respect, equality and I tend to lash out whenever my principles are violated. I can get really vicious when I sense dishonesty or hypocrisy, or harmful stupidity.

This is not acceptable in my culture, specially not for a woman. Countless people , friend and foe, told me to tame my words. So I started reading about non violent communication and did the best I could. But it has always been a struggle, because it's against my nature not to speak out freely.

Toning down your words is not always effective BTW. At times you just need to be sharp (even a little mean) to get a message through. Lets be honest for a moment. Most people love to read a critical text and many also love to read some good word fighting online. But they will condemn the writers later, after the entertainment is over.

This morning I made a trance journey and I invited all my Helpers to share their wisdom and advise. Not just one group, but all of them, my Ancestors, my Spirit Helpers, my Power Animals and the Gods. My question was: What is the energetic or spiritual cause of my increasingly bad health. (Asthma among other things)
And in stepped Thor, together with Bear.

Thor's message was very clear.
He said that I have more and more difficulty with breathing, because I don't speak freely anymore. I do not use the strength that was given to me, so it is turning inwards and against me.

So dear folks, whenever I lash out in the future, just remember I always mean well.
I really do!!!
If you don't like my tone of voice, I'm sorry. But I have to be, who I am born to be and not what you like me to be. We all have our own roles to play in this game we call life. And people with sharp tongues have their place too. Sometimes things need to be said and I'm one of those people who is not afraid to say them.
You can shoot the messenger, if you like, or you can try to understand the message. The choice is all yours.

I will keep trying to choose my words carefully, but I will stop biting my tongue.

Hail Thor!
Posted by Zia Elohka at 7:40 AM No comments: