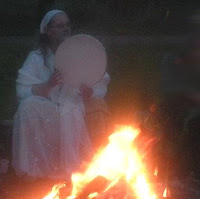 I’m priestess of the Goddess – She with many names – and I’m a shamanic practitioner.
I’ve been on a pagan path for about 25 years, but a few years ago it took another turn and my livingroom became Her temple, where I hold public ceremonies now. In my temple you wil also find altars for Thor, Odin, Lady Holda, Mary, my ancestors and my spirithelpers.
Once a year I organise the Goddess Procession Amsterdam.

I am a devotional pagan. This means that for me the Divine, in Its myriad forms, is a power outside myself. The Gods have their own will, their own agenda and a power that goes far beyond my human possibilities. The Gods have personalities and I can communicate with some of Them. I respect Them all and I love some of Them deeply, They are part of my live as good Friends who always stand by me.

As a shamanic practitioner I focus on the land where I live. It makes no sense to me to import rituals from the other side of the world, to work with the powers of the land here.
Each part of the world has its own energy, its own lifeforms and its own spirit caretakers. To restore balance, which is imho the main purpose of shamanic work, it is essential to work in alignment with the powers of a place that were there before you were born and to address these powers in a way that is familiar to them.

I'm convinced there is a lot of ancient knowledge hidden in old stories and fairytales. And during my trance journeys I found some wise and trustworthy teachers, who help me to retrieve the old shamanic tradition of Europe.
In my worship of the Gods I also get a lot if inspiration from living polytheistic religions, like Hinduism and Santeria. These people have never forgotten how to interact with the Gods and their ways of doing things have proven to work over the centuries.