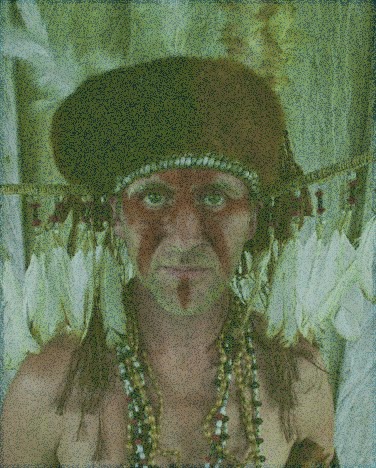 I think I should start with writing something about my personal view on shamanism.

In short: Shamanism is the art of controlled trance journeying and communing with helping Spirits in order to build bridges between the different worlds and to restore balance as much as possible.
A shamanic practitioner can switch between different states of conciousness at will and maintains good relationships with different kinds of helping Spirits. He or she is able to ask specific questions in the other world and come back with accurate, helpful answers.

This takes training and discipline and it's a way of life, with daily little rituals, offerings and communication with spirits (among other things).

Over the years I have met many people claiming to be a shaman. In some circles it's fashionable and very cool to have a title like that. And most of the time there are no questions asked. It is not only cool to be a shaman, it's also cool to be able to say you know one.

After meeting a score of these wannabes online, I met my first in real life when I had just finished my 6 years of training and felt a little lost. All of a sudden there were no other shamanic practitioners at hand to work and share with.
So when I was told I could meet another 'shaman', I had to go to satisfy my curiosity. He would be performing – drumming and singing at a meeting of poets and it was all very special, I was promised.

And there he was, a young guy with a large drum. He was high as a kite. He drummed somewhat arrhythmic and sang “heya heya” slightly out of tune. Everyone present thought it was wonderful shamanic song. Except for me. There was nothing happening. He did nothing but drum and sing a little, there was no purpose, no spirit, no energy, there was nothing but a stoned guy singing a song about nothing.

While writing this, the memory of another experience pops up in my mind, which was quite the opposite. A concert of shamanic music, with different musicians from Mongolia. There was a lot of overtone singing and elaborate costumes, even a little on stage ritual to call in the spirits, but not much was happening. Until this little frail lady took the stage.

She started by saying that she was a little out of place there, for she did not consider herself to be a shaman. Then she showed of an amazing mastery of her voice ranging 5 octaves. But when she took her drum and started improvising, I could clearly SEE what she was singing. I felt the energy waves go through me, for a moment it was as if she was singing just for me. It was only her and me in that concert hall, together with a Divine presence.

After the concert I went over to her and thanked her for that song. She looked me in the eyes, put her hand on my knee and just said “yes”. No more words needed.
This was Sainko Namtchilak.


So I tend to take those who explicitly DON'T claim to be a shaman a lot more seriously than those who need to throw in the title to identify themselves. When I encounter a self proclaimed shaman, I smile to myself and - but only if I feel like it - I will ask some questions.
- What do you exactly do?
- What do you know about the different trance states?
- Can you control them?
- How do you maintain your relationships in the other worlds?
- Do you come back from the other worlds, with accurate, helpful information?
Most of the time I get back a blank stare, or some online scolding.


The word shaman is not patented. Anyone is free to use it.
Just buy a drum as large as possible, put some feathers in your hair and there you are.
Take all kinds of natural or chemical substances, so you can loose yourself in other worlds.
Talk to all kinds of spirits, who will gladly talk back, if you have the talent to invite them.
And you can call yourself a shaman, just like the guy who has been to a sweat lodge once or twice.

You can call yourself anything you like, but don't expect me to take you seriously. You may have a talent, but without proper training, without knowing exactly what you're doing and why, you're a danger to yourself and others. Or just a person with identity problems. And in my humble opinion not a shamanic practitioner, let alone a shaman.


Why do I care, why can't I just let it be?
Because of all the haziness created by people claiming undeserved titles. And because of the implicit disrespect toward the real shamans: those medicine people of indigenous peoples, who went through all the ordeals of traditional training and initiation.
My training and 12 years experience don't even come close to that.
So how could someone with no training at all claim to be just like them? And how can practitioners who don't even believe in the actual existence of Spirits claim to be one of them? Or those who only met their 'Spirit helpers' through a card deck?


I do know some Westerners I would call shaman though.
My teacher's teacher is one of them. And another is a guy I worked with for some years, who can raise powerful energy, together with his Spirit helpers and who has helped countless people with their healing. And I'm sure there are more out there.
But they are the proverbial exception to the rule, in this culture where people just love to escape reality with romantic fantasies about being different and special, wearing fancy costumes and claiming vague titles. And where genuine ancient knowledge goes unrecognised.


Please note that all examples mentioned are based on real encounters with different people.
Posted by Zia Elohka at 4:51 AM