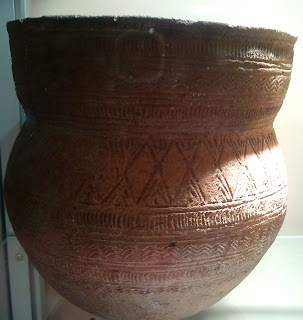 My most important spirit helpers are nothing like the enlightened ascended masters that New age mediums like to work with. They are also not the kind of spirit helpers that like to work during an espiritismo white misa. No, they are not attracted by Catholic prayer.

These spirits are ancient, from a long forgotten culture, with values that are not common nowadays. All we know about these people is the pottery they left behind and some traces of pole holes that show were they once lived. And everywhere in this country you can find their burial mounds, little bumps in the landscape that many people find inviting to sit on for a picnic. Little do these people know about those who dwell there. And little do they know about how some of these spirits create this inviting atmosphere to feed on the energy of the living.

They were once used to being worshiped, their descendants would come to bring offerings and feast in their honor. Even long after their own people had all died and their names were forgotten, their resting places were still revered as sacred. Not now anymore, their mounts have been dug up by archeologists, their bones are on exhibition in museums, their stone tools are considered primitive.

Many years ago I read about 'utisetta' an old Norse word for sitting out to get a vision. And I understood this sitting was often done on a burial mound. In Viking age society you could go out to sit on the burial mounds of direct ancestors of course and ask for guidance. Alas my ancestors don't rest in mounds and it's not allowed to sit on graves in this culture.  (Though I did sit on my grandfather's grave once, when my sisters and I found it on an abandoned graveyard, but that's an other story).

Because I was studying seidhr and everything related to it, I went to a field with ancient bronze age burial mounts, not at all knowing what to expect. My friend and I were cautious and approached the first little hill we saw very carefully, while we were not even sure if it was a burial mound our not.
Both trained in shamanic techniques and used to contact with otherworldly realms, we felt the barrier simultaneously. We were prepared and took out the little offerings we brought with us. After asking permission and offering at every barrier we encountered, we were welcomed at our first 'fairy hill'. And a great adventure had started.

There were so many of these hills in the field and over a period of a few months we visited them all. Some wanted to be left alone, some lured us in and sucked our energy. At some I got horrible visions, at some I got terrible headaches and some made me vomit. But a few of them became very special to me and I developed a friendship with some who dwell there.

One of them took me on as a kind of student and started teaching me his old wisdom. He taught me about the essence of the Goddess, calling Her "She Who Is“. He taught me about his culture and showed me things that were only years later confirmed by archeologists. He taught me a magical singing technique and only just a few months ago I found that the same technique is still used in some modern traditions.

The inhabitants of another mount simulated me to become a healer. And with every healing I do, they are right behind me. They have become my most trusted advisors, answering questions about situations in this modern time very accurately.

To talk with them, I don't have to visit their resting places anymore. I can contact these helpers any time I want, they showed me how. But to visit their burial mount is something extra special. I was crying when I came there after staying away for too long. I was so welcome, but I was also reprimanded for neglecting to bring offerings for such a long time.

After resting for thousands of years they have a lot of patience, but in the end it is all about respect. They gave me what I asked for because I asked in the right way, because I came with offerings, because I asked permission, because I asked with due respect. But I should never forget they like, they need!, to get offerings sometimes. Nothing big, nothing special, it is mostly about the effort made and the thought that counts. Though they do have preferences .......

Dear Ancient Ones, I will not stay away for too long again!